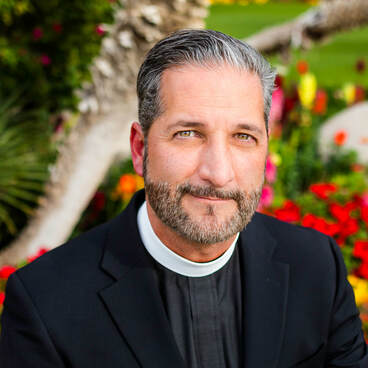 Meet The Rev. Lorenzo Lebrija
Fr. Lorenzo is the Chief Innovation Officer of Virginia Theological Seminary and the executive director of TryTank Experimental Lab. He is responsible for the entire process of development and implementation of experiments for innovation in the church.

Prior to launching TryTank, Fr. Lorenzo was the Chief Development Officer for the Episcopal Diocese of Los Angeles. He also served as the Pastor on behalf of the Bishop at St. John's Episcopal Church in San Bernardino, CA, and as priest associate at St. Athanasius Episcopal Church at the Cathedral Center of St. Paul in Los Angeles. He studied at the General Theological Seminary in New York City where he earned his Master of Divinity degree. He is also currently finishing the doctoral program at Virginia Theological Seminary.

Before entering seminary Lorenzo was president and CEO of Seraphic Fire & Firebird Chamber Orchestra, Miami's professional choral and orchestral ensemble. He was also the Miami Program Director for the John S. and James L. Knight Foundation responsible for a substantial grant portfolio and the launch of the Knight Arts Challenge. Having been General Manager for RadioActiva Hispanic Radio, as well as Editor/Director of Operations for Miami's Community Newspapers, Lorenzo also has vast experience in media and marketing.

Beyond the MDiv degree, he also has an MBA and a B.A. from Florida International University, has completed the full training at the Fundraising School at Indiana University, is a Certified Foresight Practitioner from the Institute for the Future in Palo Alto, CA, has a certificate in Design Thinking from IDEO in Palo Alto, CA, and is a graduate of Rice University's Executive Education Program.